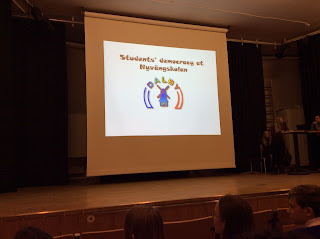 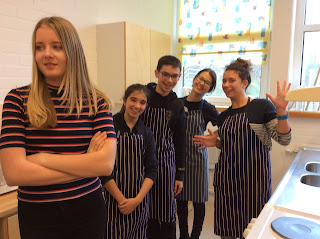 This day was a really long day. We were at school all the day. In the morning we worked with the Erasmus+ Project, especially with the app. Firstly, we discussed the questions of the app with our national groups. At eleven o’clock we had lunch. I ate rice with a Swedish sauce. The sauce was good and I found it delicious.

After having lunch we continued working with the app for about one hour and a half approximately; but this time we did it with students from other countries. I worked with two Swedish girls and one Italian girl. They were very nice. At about half past one some Swedish girls presented us the different kind of councils that we can find at the school and which ar part of the students’ democracy project.


When all the students were ready, we started eating. All the food was delicious. I ate some pasta, a piece of potato omelette with chorizo and some salad. And then we ate the dessert. There were many cakes. The Swedish students had cooked them the day before. All the cakes were made of chocolate and I tasted three of them. After dinner we went to the assembly hall and we watched videos that we have prepared before this trip. It was so funny and embarrassing for me because in our video I appeared putting the tray into the oven in a wrong way. After that, we went home and I took a shower. Later on I went to sleep.