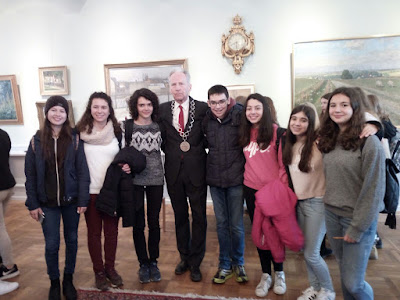 This is a photo with the Major


Today we met all together at the assembly hall at 8:15. First of all Helen , The Swedish teacher, explained us that we are all cultural detectives because between the counties that are in the project there are some cultural differences which we sometimes perceive, so they gave us  a small piece of paper where we had to write some of any cultural differences we had come across. Afterwards we collected all the papers and we read them. It was really interesting! After this activity two guys explained to us how the app of the project works and a while later we divided into several groups and I went to the group for the “Talk Show” with 4 Swedish students, 2 Italians and 2 Bulgarians. We discussed same cultural topics such as the food, for example, and each country has written some questions with three options about their school, food and words. Then we went to the canteen to have lunch and we ate fish with potatoes, grated carrots and a white sauce which was delicious! After lunch, at 12:45 we took the bus to Lund. When we arrived there we has a guided tour by some of the Swedish teachers and we visited places such as the church, the university, the museum and others. We also met the mayor, who is called Lennart Prytz, and we took some photos with him as well. When we finished the guided tour, some of mu host’s friends, Italian students and Mercè went for a walk through Lund. After a while we decide to fo into a café and have a “fika”, which is the Swedish word used when they have something to eat or drink in the afternoon. We were like nine people in one table having “fika” It was great fun!! And after that we took the bust to Dalby, the village where we’re staying. Afterwards we went to one Swedish student’s house to bake some cakes, which they will have to bring tomorrow at the cooking show. The cakes smelled really good and they seemed to taste delicious! After cooking these cakes my host and I went home on foot and we had a delicious dinner: meatballs with potatoes rated carrots, onion and a brown sauce. Now it’s time to go to bed ... Good night